Google is expected to announce quite an array of new devices at their Google Nexus event today. We should see the new Nexus 5X toting a larger display, higher MP camera, faster processing speed, fingerprint recognition sensor, however the most exciting feature is the new USB Type C connector. Another important smartphone that they are going to be releasing is the Nexus 6P. It will feature a new design, smaller front led display and the new Marshmallow Android operating system. 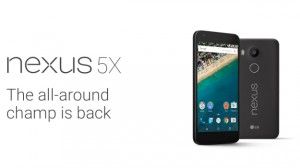