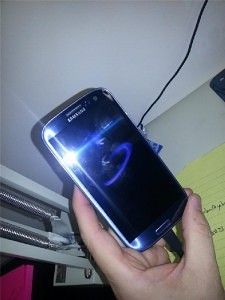 Samsung Galaxy S4 rumors are everywhere. Get ready as the next installment in the Samsung galaxy family is almost here with a bunch of new features and toys to play with. We’ll hit you with the most popular rumors of Samsungs well kept secret before it is revealed this Thursday.

The Galaxy S4 has quite a few new features floating around the rumor mill that all sound very exciting and causing quite the buzz. The S4 is believed to have a 5in full HD screen which is an upgrade from the S3’s 4.8in screen. The screen will have a 1920 x 1080 resolution, which gives it a very impressive 441 ppi (pixels per inch.) The Screen will also be RGB OLED, which put in normal people terms roughly means it uses 2 different color spectrums to show the colors of and on the screen. The RGB OLED screen is supposed to use less energy thus saving the phones battery life a little more, which could be very helpful with the new TV screen you would be sporting in your pocket.  Unfortunately though the screen seems to be the only thing changing physically. Regardless of numerous complaints as to the materials that were used in manufacturing the S3 that consumers often thought made it look “cheap” especially when compared to other phones like the iphones aluminum frame. Samsung though has released a statement saying that the Galaxy S4 will again be using plastic. Maybe it will be in a Galaxy not so far away? But for now it looks like we just have to deal.

The S4 will also be hosting a whole new setup internally. Not only will the S4 be upgrading to the 4G wave but Samsung is going the extra mile by speeding up the phones wireless capabilities to rival that of most any phone on the market right now. The S4 is rumored to be using a new combination from Broadcom called the BCM4335. The chip will be used for all the Galaxy S4’s Wireless, Bluetooth and FM radio functions. The Galaxy S4 will be running of the newest version of android titled Jelly Bean (4.2.2) Samsung also put a patent for a new technology that is also believed to make an appearance with the S4. It’s called Eye Scrolling Technology, and as the name implies it would give you the ability to scroll through your phone with nothing more than your eyes.  Your front facing camera would track your eye movement and position and scroll your screen accordingly so if your one of those people who hates fingerprints on their screen you might just want to look into this.

Sound exciting enough? Just a few more things before you run out your to get yours. The S4 is also believed to have a wireless charging option with potential for much more. The options could from charging it by setting it down all the way to playing music without putting it in a dock or even uploading and syncing photos and videos. It’s starting to look like you’ll never have to touch the thing but lets be honest would you want to? They have also upgraded the rear-facing camera to an impressive 13 megapixels with a video recording capability of 1080. Your daily life could be in almost movie quality!

Did we also forget to mention it is believed to have a time machine?  Yeah that’s happening. Which would be nice considering the Galaxy S4’s unveiling is later this week thus putting it on sale by Mid – April at the latest. So I guess for now then the question still stands. Are You Ready 4 the Next Galaxy?